Here are your top sports happenings this week for all you non-sports fans…No foolin’!

1) Hamburgers and Hockey – The fans of the professional hockey team, the Ottawa Senators, are throwing hamburgers onto the ice after the games. And here’s why: Andrew Hammond is a 27-year-old Canadian professional hockey player – he’s a goaltender. In college his nickname was “Hamburglar” because he was known to “gobble up loose pucks.” His professional career has not been stellar. He was not drafted; the Ottawa Senators signed him as a free agent in 2013 and he’s been primarily playing for their minor league team. In February the Senators lost both their first and second goaltenders to injury, so they called up Hammond. This undrafted 27-year-old, whose last game was a minor league loss where he’d allowed 4 goals, proceeds to go on a record-breaking streak winning 14 of his first 15 games. This infusion of success has not only landed Ottawa in the playoffs, it has revived the Hamburglar! 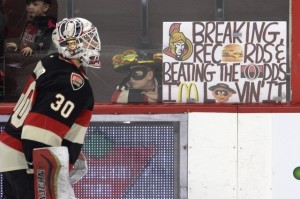 Fans started wearing hamburglar masks, McDonald’s gave Hammond “free burgers for life” (maybe they’re rooting for the other team), and last but not least, fans have been throwing burgers onto the ice! You gotta love a good Cinderella story, eh?

3) Women’s Division 1 Final Four Teams: Connecticut, Notre Dame, Maryland, and South Carolina. These were all the #1 seeds (good job, NCAA). My money is on UConn; they’ve won 8 championships in the past 15 years. They are 36-1 this season and they have DOMINATED…we’re talking 30, 40, 50 point deficit dominating. Impressive stuff. Here’s the BRACKET.

4) To Tee or Not to Tee – Tiger Woods still isn’t sure if he’ll play in Augusta for the Masters. Everyone is curious – not because they think he can win it (it’s been 10 years since he won The Masters), but because it’ll be more fun if he does. And when you’re a big shot athlete like Tiger and you’ve won before…you can drag your feet on your commitment to playing (hey that sounds a lot like how he treated his marriage. Had to say it!) And now, oooh, it’s reported that Tiger’s plane has been spotted in Augusta. OoooOOOooohh!

5) Women get fake boobs, men get fake noise (And no I’m not talking about a fart machine). The louder your home crowd, the tougher it can be for a visiting team. The NFL is fining the Atlanta Falcons $350,000 plus a 5th round draft pick in 2016 for using an audio file during games with fake crowd noise for the past two seasons at the Georgia Dome. It’s reported that the Falcons were playing the fake crowd noise during the opposing team’s huddle, likely making it harder to call plays. Not cool, man. In addition to the $350K and the draft pick, the Falcons President Rich McKay is suspended from the competition committee.

Thanks for reading “I Read It Somewhere” aka IRIS Sports!